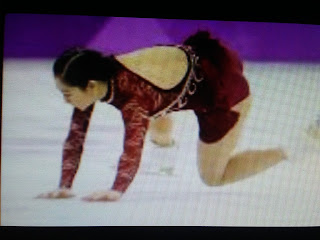 9th?  Why bother going to South Korea to give a rotten effort like that?
This unacceptable!  Who the hell put together this garbage team?  Gimmie a break!

Chicago Tribune reports one by one, the best in American figure skating fell to the ice, their Olympic hopes dashed in the opening seconds of their short programs at the Pyeongchang Games.
It was emblematic of the state of U.S. figure skating.

Sure, Nathan Chen did rebound from a dismal short program to have the highest-scoring free skate in the men's Olympic program. The Shibutani siblings, Maia and Alex, won ice dance bronze. The U.S. squad even managed to hold off Italy and Japan to win bronze in the team event.
But for the every-four-year fan, figure skating begins and ends with the women, and there was no doubt during Wednesday's short program that the U.S. has fallen well behind its rivals.