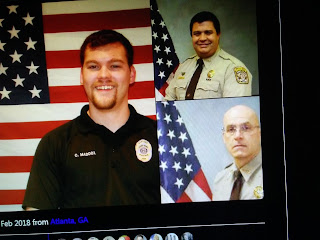 Terrible!  We lost a number of police officers this week throughout the country.
This is the third in 6 days.

NBC News reports a police officer was killed and two deputies were seriously wounded in a shooting that also left a suspect dead south of Atlanta, authorities said Friday.

Henry County Sheriff Keith McBrayer said it happened as the officers were serving an arrest warrant around 11 a.m. at a home in Locust Grove, about 40 miles southeast of Atlanta.
"It all happened inside the residence," the sheriff said at an afternoon news conference.