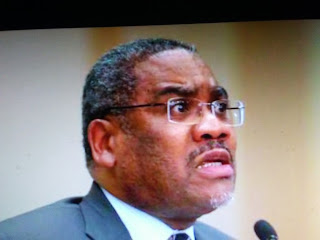 Gregory Meeks happens to be my congressman and he's one of the most corrupt representatives in Congress.
He once ran a non-profit that raised money for Hurricane Katrina victims and the money never got to New Orleans.  Wherever you find Meeks, there's something shady going on.

Daily Caller reports three Democratic congressmen attended a private dinner hosted by Iranian President Hassan Rouhani in 2013, a new report reveals.
Reps. Keith Ellison of Minnesota, Andre Carson of Indiana and Gregory Meeks of New York attended the private dinner, along with Louis Farrakhan, a notorious anti-Semite who leads the black supremacist group Nation of Islam.
Iran is the number one state sponsor of terrorism, according to the United States government, which has listed the Islamic Republic as a state sponsor of terror since 1984. Rouhani was in New York for a United Nations meeting and held the dinner party just hours after speaking to the UN General Assembly.
Final Call, a Nation of Islam publication, noted the three Democrats’ attendance at the time and included photos of Ellison and Meeks at the dinner party. But aside from the Final Call article, the three Democrats’ presence at the dinner remained secret until a Wall Street Journal column revealed it on Friday. None of the three congressmen’s offices responded to The Daily Caller’s request for comment for this article.