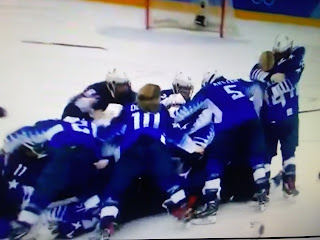 Horary for the USA women!
Otherwise it's been a dismal showing for Team USA at the 2018 Olympics.

AOL News reports the United States women's hockey team beat Canada in thrilling fashion on Wednesday night to take gold at the Winter Olympics for the first time since 1998.

It was a dramatic back-and-forth match filled with history, with the teams so closely knotted that even the shootout needed an extra round before the dust finally settled.

The Americans were first to get on the board. After two missed power-play opportunities earlier in the period, veteran Hilary Knight was able to sneak a quick deflection past Canadian goalie Shannon Szabados for a goal in the team's third 5-on-4 of the game. The goal came with with just seconds left in the first period, helping the United States take a 1-0 lead into the break.