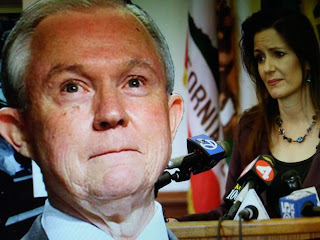 Good!  It would be even better if they perp walked Libby Schaaf
for aiding and abetting illegals.  It would send a strong message to other Democrats that breaking federal laws won't be tolerated not even a mayor of a city.

Fox News reports Attorney General Jeff Sessions on Wednesday unloaded on California Democrats who push a “radical, open borders agenda,” as his Justice Department sued the state over its immigration policies --  warning that there “will be no secession.”

Sessions spoke at an event for California law enforcement and a day after the Justice Department announced it was filing a lawsuit against the “sanctuary city” state over three pieces of legislation that it said interferes with federal immigration policy.

In his remarks, Sessions noted “worrisome” trends as violent crime increased in 2014 and 2015, particularly a surge in homicide and drug availability. He said that a lawful immigration system was part of tackling such trends.