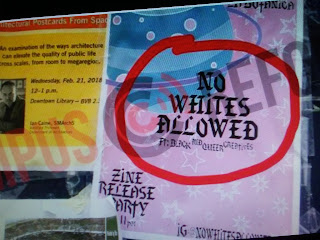 Liberal hatred towards White People continues.
And it happens to be mainline Democrat Party thought.


Campus Reform reports  a group of students at the University of Texas, San Antonio plans to start publishing a “No Whites Allowed” (NWA) magazine.

According to a Facebook event titled “Zine Release,” the magazine will be revealed on March 1 at La Botanica, which describes itself as “Texas' first vegan restaurant with a full bar and performance and event venue.”

"So you're saying that because segregation happened, it's fine to be racist against Whites?"