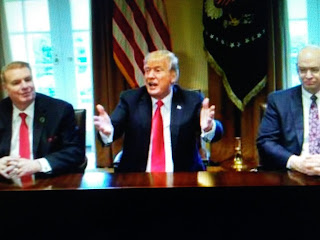 Nobody in Washington is batter at manipulating the media to his advantage than President Trump.
He knows exactly how to get the corrupt media off their game in a direction he wants them to go all the time.

The meetings make Trump look engaged and interested, countering critics who have questioned his mental acuity, but they have done little to advance policy.

Democrats, who keep attending despite seeing few actual results, increasingly question whether these sessions are merely a repackaging of Trump's star turn on The Apprentice, a TV show he hosted for 14 seasons.