Liberal Lunacy on College Campus: Student kicked out of class for telling professor there are only two genders 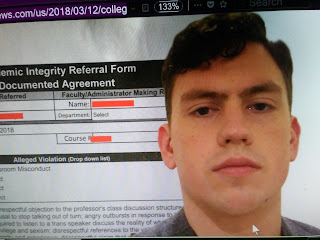 This college student is totally in the right and I stand with him 100%.
There are only two genders because that's what Almighty God created.  End of debate!


Fox News reports a religious studies major was barred from Christianity class at Indiana University of Pennsylvania for saying during class that there are only two genders.

Lake Ingle, a senior at the university, said he was silenced and punished by IUP Professor Alison Downie for questioning her during a Feb. 28 “Christianity 481: Self, Sin, and Salvation” lecture.

After showing a 15-minute TED Talk by transgender ex-pastor Paula Stone Williams discussing the “reality” of “mansplaining,” “sexism from men,” and “male privilege,” the professor asked the women in the class to share their thoughts. When no women in the class said anything, Ingle spoke up, challenging the professor on biology and the gender wage gap.