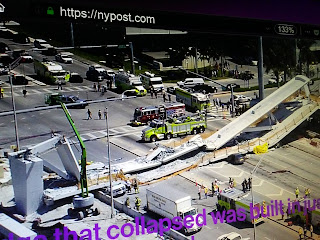 Well, the bridge didn't last but a few days.
Instant bridge turns out to be an instant dumb idea. It failed he stress test big time.

Daily Mail reports the innovative 'instant bridge' which was installed in just six hours on Saturday, was being tightened and stress tested when it collapsed on Thursday, killing up to ten people and leaving another ten injured.

Engineers had been working to tighten the cables suspending the bridge, which had loosened since it was installed five days earlier, when the 950-ton concrete structure fell onto the busy seven lane highway below on Thursday.

Miami-Dade Mayor Carlos Gimenez said that crews were also conducting a stress test on the bridge, which involved two Miami-Dade Fire Rescue workers on the bridge, when it collapsed. Investigators will probe whether they made a mistake.

The pedestrian bridge, designed to last more than 100 years to allow students at Florida International University to safely cross the roadway between campus and a popular residential area, was built using a method known as 'accelerated bridge construction' - which was supposed to allow the 175-foot span structure to be installed within a matter of hours.