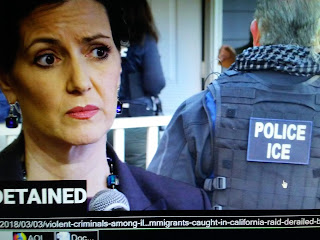 I think calling Mayor Libby Schaqaf a law breaking lunatic is a extremely accurate description of this woman who belongs in jail alongside the illegals she shielded from federal justice.

Fox News reports a sweep of Northern California by federal immigration officials this week, which was partly thwarted when the Oakland mayor sounded the alarm, nabbed a number of illegal immigrants convicted of a variety of serious and violent crimes.
Immigrations and Customs Enforcement (ICE) officials announced this week that the four-day raid led to the arrest of 232 illegal immigrants in the San Francisco Bay Area.
Of those 232, 180 “were either convicted criminals, had been issued a final order of removal and failed to depart the United States, or had been previously removed” from the country and had come back illegally.
Another 115 “had prior felony convictions for serious or violent offenses.”
The numbers might have been greater, but for the intervention of Oakland Mayor Libby Schaaf, who tweeted out a warning of the impending raid, tipping off others who might have been caught.
Acting ICE Director Tom Homan said on "Fox & Friends" that Schaaf’s warning meant that there are roughly 800 illegal immigrants they were unable to locate.