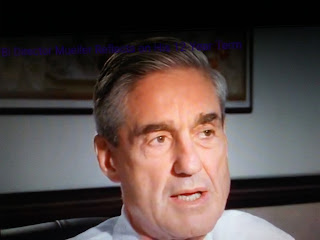 He hasn't found any evidence of Russia-Trump collusion after nearly two years and millions of dollars of taxpayer spent.

Rumors are circulating that he has purchased a new summer house in Martha's Vineyard with money earmarked for the probe.

He's a man in search of a crime, any crime, even if he has to manufacture one to bring down a sitting president.

Meanwhile real proof of collusion between Russia, Hillary Clinton, the DNC, the FBI, and the DOJ goes ignored.  This will not stand and is unsustainable.  Millions of eyes  are watching and sees the injustice.  Robert Mueller's day of reckoning is coming.  He will not succeed!
at 4/10/2018 06:48:00 AM