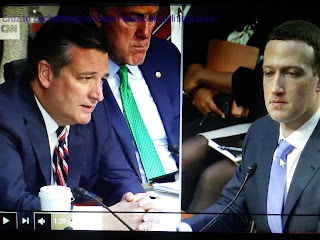 I'm very glad Cruz told the world in front of Mark Zuckerberg's face that Facebook censors conservative thought as a business practice.
I'm a victim of it myself because I got 5,000 FB friends with precious little interaction.

Bloomberg reports U.S. Senator Ted Cruz, a Republican from Texas, peppered Facebook Inc. CEO Mark Zuckerberg with questions about the social network’s approach to political speech on its platform, asking specifically about concerns that pages associated with conservative viewpoints had been shut down.
"There are a great many Americans who I think are deeply concerned that Facebook and other tech companies are engaged in a pervasive pattern of bias and political censorship," Cruz said at a joint hearing of two Senate committees in Washington on Tuesday. He referred to reports in 2016 that Facebook suppressed news from conservative sources in its "trending stories" column.