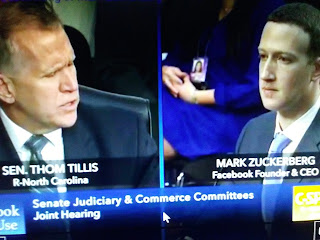 This fuss over Facebook is such crap!
Only because it's related to Trump winning election that has it become a thing.

Daily Caller reports Facebook CEO Mark Zuckerberg was grilled by the Senate Tuesday for allowing Cambridge Analytica, a data company that worked for Donald Trump’s campaign in 2016, to harvest user data from his platform.

However, little was made of the fact that the Obama presidential campaign in 2012 used the same tactic with the social network. Former Obama campaign staffers have openly bragged about how Facebook turned a blind eye to the practice and even congratulated them.

Republican North Carolina Sen. Thom Tillis raised this discrepancy in his forceful questioning of Zuckerberg on Tuesday.
Tillis said, “I think that we need to fully examine what Cambridge Analytica did,” before noting a number of articles cataloging the Obama campaign for doing the same.