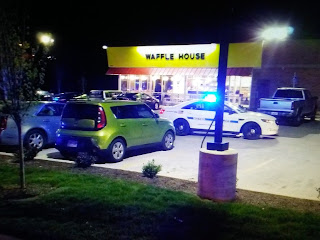 Naked?  That must've been an additional shock.

NY Post reports three people were killed and several others injured when a naked gunman burst into a Waffle House in the Nashville area and opened fire early Sunday, according to reports.

The gunfire erupted about 3:30 a.m. at the Waffle House at 3571 Murfreesboro Pike, where a customer managed to wrestle away the gunman’s rifle before he fled on foot, police said on Twitter.

Police said they were looking for 29-year-old Travis Reinking of Morton, Illinois, as a person of interest in the shooting. They identified him based on the vehicle he drove to the eatery.