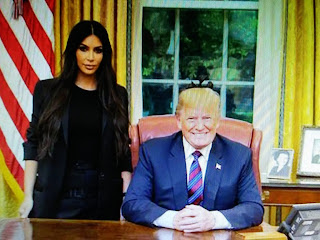 I don't know Kim Kardashian was a expert on prison reform instead of big booty reform.

NY Post reports it was the commander and cheeks!

Kim Kardashian strutted into the Oval Office on Wednesday for a sit-down with President Donald Trump to discuss criminal justice issues — including an imprisoned drug offender she discovered on Twitter.

Kardashian was spotted entering the West Wing around 4:45 p.m. and leaving about an hour later.