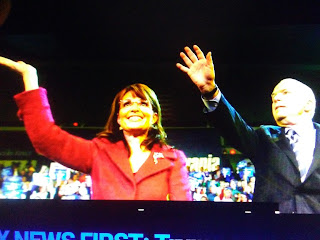 What is Sarah Palin suppose to do with this?
This is why John McCain has no class and is facing his death as a petty bitter old man.  Disgusting!  McCain doesn't have the sense to be ashamed of himself before he dies.

Fox News reports Sarah Palin, the former Alaska governor and John McCain’s 2008 running mate, reportedly said she feels a “perpetual gut-punch” every time she hears about McCain’s regret in picking her for his team

“That’s not what Sen. McCain has told me all these years, as he’s apologized to me repeatedly for the people who ran his campaign,” Palin told The Daily Mail. She said over the years, "I stop him all the time and say, 'Please don't apologize.'"

McCain wrote in his book, “The Restless Wave,” that he regretted not choosing his friend, Connecticut Senator Joseph Lieberman, as his running mate, calling it “another mistake that I made,” according to The New York Times. McCain reportedly wrote that his advisers warned him against picking her a vice-presidential candidate who caucused with Democrats.