Mad Maxine Waters, the dumbest women in Congress, to GOP rep: 'I resent the remark about making America great again' 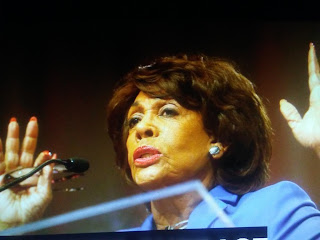 I resent that Maxine is a member of Congress because she's an embarrassment to the United States.

Rep. Mike Kelly, who represents Erie and Butler, said on the House floor that lawmakers must work harder toward "trying to make sure that we're making America great every day in every way."

"Stop talking about discrimination and start talking more about the nation," he said. "We are coming together as a people in spite of what you say."

Before Waters was offered the floor, Rep. Tom McClintock (R-Calif.) -- the presiding officer at the time -- reminded Kelly to address remarks to the chair.

Waters, of South Los Angeles, began speaking and appeared to shout at Kelly, who was apparently turning to exit the House chamber.