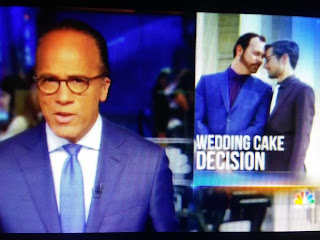 Make no mistake.  This is a landmark decision the corrupt media complex is trying to diminish.

NewsBusters reports religious freedom advocates were joyous on Monday after the U.S. Supreme Court ruled in favor of Jack Phillips of Colorado -- the baker who declined to make a wedding cake for a same-sex wedding because doing so would have conflicted with his religious beliefs.

The highest court in the land sided with Phillips because the Colorado Civil Rights Commission subjected him to what could be argued was anti-religious bigotry. But despite the historic nature of the ruling, broadcast network news outlets ABC and NBC were more relieved that the ruling had a “limited” scope and seemingly only applied to this one case.