Comey, DOJ officials may be in crosshairs as long-awaited IG report on Clinton probe set to drop 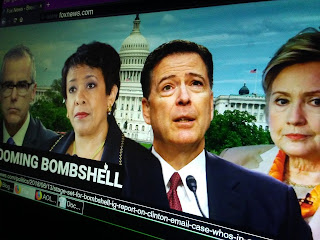 At this point I'm very skeptical that those corrupt officials at DOJ/FBI will ever face the justice they deserve and the country will continue to suffer for it.
In my opinion, the rule of law is an empty phrase.

Fox News reports a slew of FBI and DOJ officials could face a reckoning when Justice Department Inspector General Michael Horowitz on Thursday releases a long-awaited report detailing his review of the Hillary Clinton investigation during the 2016 presidential race.

“I think it's going to put a lot of the missing pieces in this giant puzzle together,” House Judiciary Committee Chairman Bob Goodlatte, R-Va., predicted Wednesday on Fox News’ “America’s Newsroom.”
For more than a year, Horowitz has been reviewing the FBI and DOJ’s actions related to its investigation into Clinton’s use of a private email server while she was secretary of state.