Sandy Alderson is destroying the Mets and must be stopped 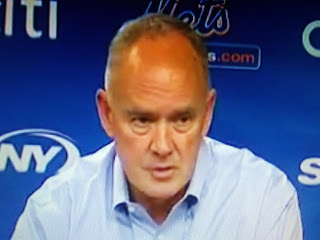 The one man that is responsible for the pathetic mess the Mets are in is GM Sandy Alderson.
He's the architect of the team.  He's the guy who hired in over his head Mickey Callaway.  He is the guy who has overseen a dismal minor league system that has failed to produce multiple impact position players in eight years.  Sandy is a joke!

They want to sell you on that. So badly.

And then, on Sunday afternoon, the team reported to Citi Field having no idea who the starting pitcher was. This was not due to some outside-the-box thinking on motivating players, or going old-school, back to when a pitcher would learn he was starting that day because the manager had placed a baseball in his spikes.

No. This happened because Jason Vargas hurt himself jogging on Wednesday in Denver. The Mets knew that, though it didn’t seem bad enough at first to warrant a DL stint. That didn’t happen until Saturday. That was unfortunate timing for the Mets (and less fortunate for the Dodgers, deprived of taking aim at his 8.60 ERA).

The Mets would not be the first team in the history of baseball to warrant an emergency starter. Yes, it is a longtime failure that the Triple-A team is in Las Vegas and thus it makes for some difficulty in travel arrangements. But the Double-A team is in Binghamton. That’s a three-hour drive, tops. Someone could easily have been summoned.