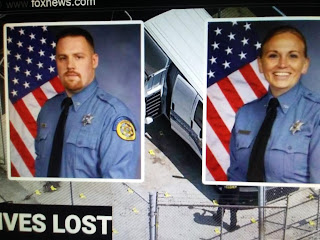 This is a damn shame!

Fox News reports a second sheriff’s deputy who was shot Friday near a courthouse in Kansas City died from her injuries early Saturday morning, officials said.

The incident occurred when they were both "overcome by an inmate being transferred from jail to the courthouse" on Friday morning, police said. The suspect was also shot and underwent surgery, but his condition was unkown.