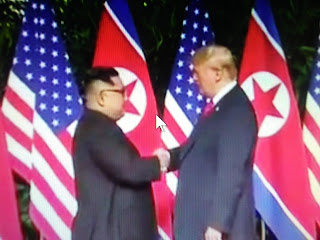 Let's not forget the reason Kim is meeting Trump is because Trump wasn't afraid to guarantee the obliteration of North Korea.  Case closed!
Kim wants to survive and no other president showed this kind of determination and strength.

Moments later, as Trump and Kim sat side-by-side, the American president told a group of reporters: "We will have a terrific relationship, I have no doubt." Kim said through an interpreter that it "was not easy to get here" and that there "were obstacles, but we overcame them to be here."

About 40 minutes later, the two leaders emerged from one-on-one talks accompanied by their interpreters and made a brief appearance on a balcony. When asked how talks were progressing, Trump said: "Very good. Very, very good. Excellent relationship, thank you."