Trump shows off 'The Beast' to Kim during historic Singapore summit 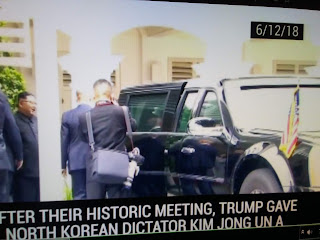 Hey, lookie here, Kim.  Maybe you showed get one?

The media spotted Trump and Kim approaching the limousine, adorned with an American flag. Trump gestured to the car and then a Secret Service agent opened the right passenger door.