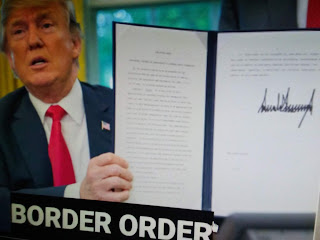 It's a good political move for Trump to get this particular issue off his screen.
It takes away the optics from Democrats and offers GOPers new spin rhetoric is they bothered to be creative.  For example, not separating children from illegals parents leaves the Dems open to charges of endorsing mass incarceration.

Fox News reports President Trump on Wednesday signed an executive order to allow children to stay with parents caught crossing the border illegally -- moving to stop the family separations that have triggered a national outcry and political crisis for Republicans.

The measure would allow children to stay in detention with parents for an extended period of time. This comes as congressional Republicans scramble to draft legislation to address the same issue, but face challenges mustering the votes.

In signing the measure, Trump said he wants to keep families together while also enforcing border security. He vowed his administration's "zero tolerance" policy for illegal immigration would continue.

Trump, previewing the measure earlier in the day during a meeting with lawmakers, said the move would "be matched by legislation." He also said he's canceling the upcoming congressional picnic, adding: "It didn't feel exactly right to me."