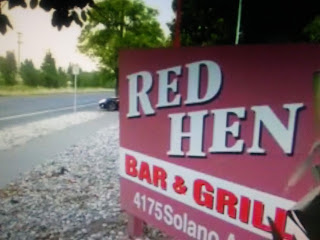 This is not right.  It shows the power of media.  But, it's the Virginia Red Hen that deserves all the scorn.

Yahoo News reports Red Hen Bar and Grill in California is facing the repercussions of being mistaken for the Red Hen restaurant in Lexington, Virginia, where White House press secretary Sarah Sanders was asked to leave Friday night because of her association with the president.

The independently owned restaurant along Highway 29 in Napa, nearly 3,000 miles from the incident in Virginia that made national news, has been caught in the political crossfire, owner Norm Sawicki said.

“We got lots of phone calls,” Sawicki, who told ABC News he has been the sole owner for over 35 years, said, adding that some of them were threatening.

Weekend business was down more than 30 percent, he said.