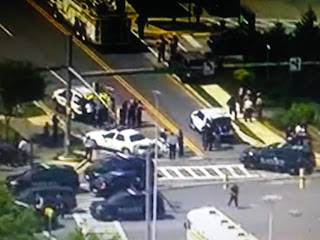 This is really bad!

Capital Gazette reports at least five people were killed and several others were “gravely injured” in a shooting Thursday afternoon at the Capital Gazette in Anne Arundel County, authorities said.

A shooter is in custody, police said. Police would not name the suspect or say what type of weapon was used.

Anne Arundel County Police initially confirmed about 3:15 p.m. that they were responding to an “active shooter” at 888 Bestgate Road, where the newspaper’s offices are located. The Bureau of Alcohol, Tobacco, Firearms and Explosives also responded to the scene.

The Capital Gazette is owned by The Baltimore Sun.