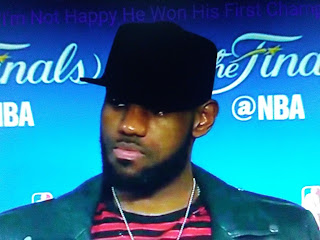 I guess James got tired of losing to the Golden State Warriors at the NBA Championship.
So, he lose to them at the Western Conference finals instead.

Cleveland Plain Dealer reports LeBron James agreed to a four-year, $153.3 million contract with the Los Angeles Lakers on Sunday, ending his second run as the face of his hometown team, the Cleveland Cavaliers.

James, born in Akron and drafted No. 1 by the Cavs in 2003, is leaving the Cavs for the second time in eight seasons. But this time, it's two-years removed from bringing the organization its first title.

James' agreement with the Lakers was announced through a simple press release sent by his agent, Rich Paul, which says James, a 14-time All-Star, three-time Finals MVP, and two-time Olympic gold medalist, was joining the Lakers. The release said the deal was worth $154 million.