Savages on the Hardwood: Refs and basketball players square off in wild brawl in Atlanta 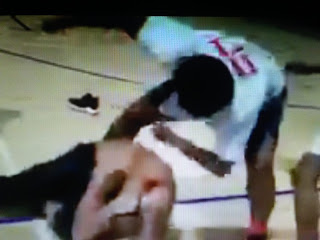 For people who are supposed to play basketball get into a brawl instead, they  deserve to be called savages for exhibiting bad behavior.
It's an appalling way to act and has to be called out for what it is.

An AAU basketball game spiraled out of control Sunday in the Atlanta area, where a game devolved into an all-out brawl.

The videos of the brawl, in a game between Chicago’s Raw Athletics and the Houston Raptors, according to Yahoo Sports, have gone viral. One begins with three players surrounding a prone official, who escaped the melee but clearly was steaming. He, and other officials on hand, were involved in multiple scrums with the players; each time the violence died down, another fight would break out.