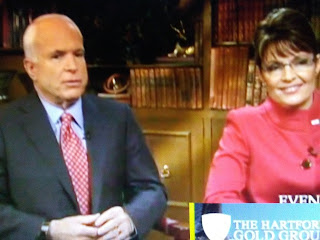 When John McCain passed away I wrote on Facebook and Twitter, "RIP, John!"
There was no need to say what I really thought of him.  Until now.

Telling Sarah Palin that's she not welcomed at his funeral is petty and low class!  There was no need to do that whatsoever.  Yes, John McCain was a great military war hero.  He suffered a great deal when he was held in captivity in Viet Nam.  That cannot be denied.

But, as a politician he sucked!  He did not serve his country well and more often than not he was on the wrong side of issues that hurt America more than it helped.  If ii weren't for Sarah Palin adding life to one of the most dismal and listness runs for president in U.S. history, McCain would have lost by an even bigger margin.  Sorry John, you're going out like a chump!

Breitbart reports former Alaska governor Sarah Palin, who was Sen. John McCain (R-AZ)’s running mate in the 2008 presidential election, has been excluded from his funeral.

Breitbart News has independently confirmed an earlier report in People magazine, which reported that Palin was not sent an invitation, and was told through intermediaries to stay away from the ceremony.

McCain fundraiser Carla Eudy confirmed to People that Palin had not been invited — possibly, People speculated, at the behest of the McCain family.