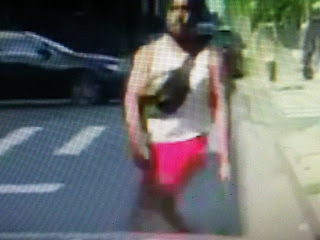 This is what has become of NYC since Mayor Bill de Blsio has forbidden the police to use stop and frisk to get guns off the street.
In this video see two teens walking across the front of a car from right to left, one of them shooting a video of the shooter on his cell.  The shooter in red shorts, with no fear of being caught carrying a gun, pulls out his weapon and fires shots at the teens hitting them both.  Thank you  Mayor Bill de Blasio.

NY Post reports dramatic video shows the moment a man pulled a gun and opened fire, striking two teens this week in broad daylight in Harlem.
In the 17-second cellphone video — which was taken by a New York state parole officer sitting in the passenger seat of a parked car and obtained by The Post — the red-shorts-wearing gunman can be seen running toward two boys before two shots ring out.
The shooting occurred on Park Avenue near East 112th Street around 4 p.m. Monday, law enforcement sources said.