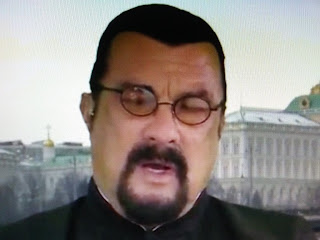 This is interesting.  We need to a Russian born American citizen as a counterpart.

NewsMax reports Steven Seagal has been appointed a special representative for the Russian government to promote "Russian-American humanitarian ties," the Russian foreign ministry announced on its Facebook page.

"The task is to promote the further development of Russian-American relations in the humanitarian sphere, including interaction in the field of culture, art, public and youth exchanges and more," the foreign ministry said.

Sagal is a longtime supporter of Russian President Vladimir Putin and is a Russian citizen. He signed his Russian passport in Putin's presence in a ceremony in 2016.