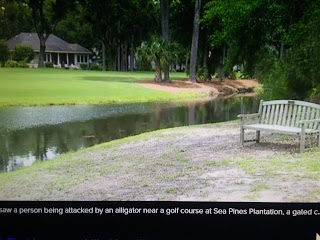 Wow, this is scary!

ABC News reports a woman died after being attacked by an alligator while trying to save her dog on Hilton Head Island in South Carolina Monday morning, according to local authorities.
Witnesses saw the woman walking a dog near a lagoon at Sea Pines Plantation, a gated community on Hilton Head, when she was attacked by the over 9-foot-long alligator and pulled underwater, the Beaufort County Sheriff's Office said.

The woman was walking her dog near the 13th green of the community's golf course when she got too close to the water and the gator tried to attack the dog, Beaufort County Coroner Edward Allen said. Sam Chapplear, assistant chief of wild life for the South Carolina Department of Natural Resources, said the woman "got involved" when the gator grabbed the leash and there was a tug-of-war over it.