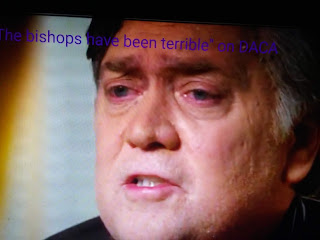 Liberals who lie and call themselves progressives aren’t interested in debate.
You either agree with their bullshit, or they clasped their ears and scream, "Get out!  We don’t want to hear you!"  It's been happening in our college campuses for years.  Very childish!


NY Times reports Stephen K. Bannon, President Trump’s former chief strategist, will no longer appear as a headliner at this year’s New Yorker Festival, David Remnick, the editor of The New Yorker, announced in an email to the magazine’s staff on Monday evening.

The announcement followed several scathing rebukes and high-profile dropouts after the festival’s lineup, with Mr. Bannon featured, was announced. Within 30 minutes of one another, John Mulaney, Judd Apatow, Jack Antonoff and Jim Carrey said on social media that they would be pulling out of scheduled events at the festival. Right around the time when Mr. Remnick announced the cancellation of Mr. Bannon’s participation, Patton Oswalt did the same.