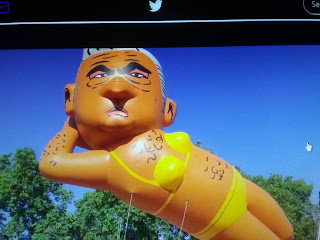 Since this clown has been elected mayor of London, the city has gone backwards in quality of life.
Crime has skyrocketed under this mayor.  And all Sadiq Khan does is shrug his shoulders and declares it the new normal.

BBC reports a giant balloon of a bikini-clad Sadiq Khan has been flown in London as part of a campaign to oust the capital's mayor.
Campaigners raised £58,182 for the 29ft-long blimp, which was launched in Parliament Square earlier.

Mr Khan said people were "welcome" to look at the balloon but he did not think the swimwear suited him.
Organiser Yanny Bruere has denied claims he is affiliated with any right-wing groups.
His anti-Khan crowdfunding campaign was launched following the Donald Trump baby balloon flown by protesters during the president's visit in July.