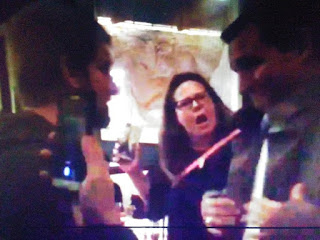 This kind of stuff is really in very poor taste and rude.
But, that doesn’t matter to vile Leftists like these.  There's a time and place for protesting.  In fact, this isn't protesting at all.  It's verbal assault and disorderly conduct.  Arrests should have been made.

Daily Caller reports Republican Texas Senator Ted Cruz was chased out of a DC restaurant by protesters on Monday night, according to video posted on Twitter.
Two videos were posted by “Smash Racism DC” and they show a large group of protesters chanting “We believe survivors” in reference to sexual assault allegations against Supreme Court nominee Brett Kavanaugh at Sen. Cruz and his wife, Heidi Cruz.

Cruz has been friends with creep Kavanaugh for 20 years. Now Cruz is on judiciary committee hearing his testimony.