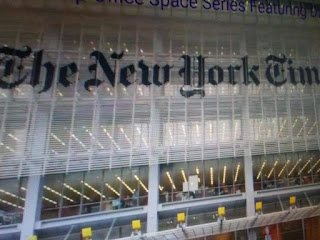 If the failing New York Times got a hold of Donald Trump's tax records, federal laws (US Code 26-3103) have been broken.
Several people need to go to prison provided that the Times actually got Trump's tax records.  But, since that papers credibility is as low as Christine Blassey Ford, it may not really be an issue.  This is the extent Leftists who hate Trump are stooping.  They break the law to get him.


The rag sheet-NY Times reports President Trump participated in dubious tax schemes during the 1990s, including instances of outright fraud, that greatly increased the fortune he received from his parents, an investigation by The New York Times has found.

Mr. Trump won the presidency proclaiming himself a self-made billionaire, and he has long insisted that his father, the legendary New York City builder Fred C. Trump, provided almost no financial help.

But The Times’s investigation, based on a vast trove of confidential tax returns and financial records, reveals that Mr. Trump received the equivalent today of at least $413 million from his father’s real estate empire, starting when he was a toddler and continuing to this day.

Much of this money came to Mr. Trump because he helped his parents dodge taxes. He and his siblings set up a sham corporation to disguise millions of dollars in gifts from their parents, records and interviews show. Records indicate that Mr. Trump helped his father take improper tax deductions worth millions more. He also helped formulate a strategy to undervalue his parents’ real estate holdings by hundreds of millions of dollars on tax returns, sharply reducing the tax bill when those properties were transferred to him and his siblings.

These maneuvers met with little resistance from the Internal Revenue Service, The Times found. The president’s parents, Fred and Mary Trump, transferred well over $1 billion in wealth to their children, which could have produced a tax bill of at least $550 million under the 55 percent tax rate then imposed on gifts and inheritances.