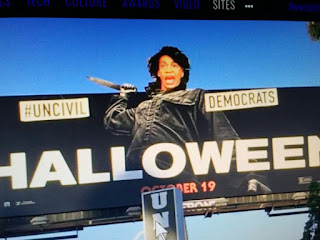 Brilliant!
All the more reason to vote Republican and keep power away from Mad Maxine.

Hollywood Reporter reports a billboard advertising the new Halloween movie opening Friday was altered after a street artist swapped out an image of serial killer Michael Myers and replaced it with one of Maxine Waters.

The gigantic billboard at Pico Boulevard in West Hollywood remains intact, only the congresswoman is now holding the sharp butcher knife in her right hand, looking ready to plunge it into an unsuspecting victim. The phrase "#Uncivil Democrats" has also been added.