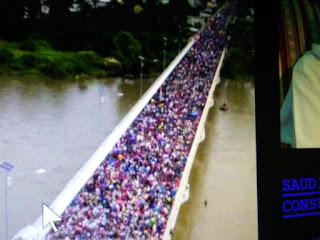 I think this caravan is a giant propaganda stunt funded by wealthy Democrats.
Mexican government has already given Trump that this caravan is not reaching the US border.

AP reports migrants traveling in a mass caravan burst through a Guatemalan border fence and streamed by the thousands toward Mexican territory on Friday, defying Mexican authorities’ entreaties for an orderly crossing and U.S.

President Donald Trump’s threats of retaliation.
On the Mexican side of a border bridge, they were met by a phalanx of police with riot shields. About 50 managed to push their way through before officers unleashed pepper spray and the rest retreated.

The gates were closed again, and police used a loudspeaker to address the masses, saying, “We need you to stop the aggression.”