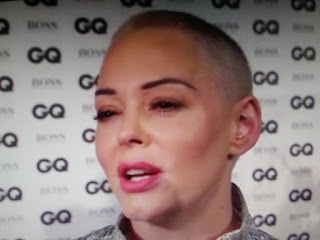 I've been saying the #MeToo movement is bogus from day one!
It's been nothing but a shakedown operation to extort money from corporations.  It's the same game plan started by Jessie Jackson and Al  Sharpton.  Threaten a boycott and the company pays #MeToo to go away and move onto the next corporate target.  It's not about women coming forward with allegations of abuse.  It's about making money first and foremost.


Daily Mail reports the actress who kick-started the exposure of Hollywood moguls who allegedly exploited positions of power to abuse women has branded #MeToo campaigners against sex attackers 'losers'.

Rose McGowan accused producer Harvey Weinstein of rape this time last year, sparking an avalanche of allegations in the entertainment industry and beyond.

As stars such as Kevin Spacey and Morgan Freeman were alleged to have assaulted or harassed performers, activists began using the hashtag to share their ordeals online.

But McGowan has slammed the movement as 'bull****' in today's Sunday Times Magazine, which comes the day after Judge Brett Kavanaugh was sworn in as a Supreme Court justice in the face of historic sexual assault allegations he denies.

After year of stars such as Salma Hayek and Gwyneth Paltrow claiming to be vistims of harassment, McGowan has said she understands why Donald Trump supporters hate Hollywood, whose apparent liberalism she says is fake.