Where was all this mainstream media concern when OUR OWN ambassador and others were killed in Benghazi? 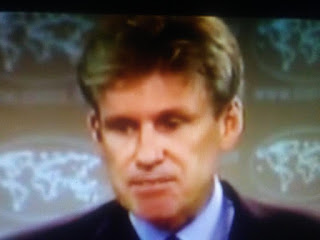 For the past few days the American mainstream media has been breathlessly giving updates on the alleged disappearance and killing of a writer named  Jamal Khashoggi that occurred in the Saudi Arabian embassy in Turkey.
Khashoggi is a name I would suggest 99.9% of the American people has never heard of before.  He had no connection to the United States other than some of his articles appeared in the Washington Post.

Just being a "journalist" is enough of a hook for the media to somehow justify intense scrutiny.  But why?  It isn't like other journalist aren't routinely killed all over the world in other countries.

So why is  Jamal Khashoggi deserving of all this attention and concern?

It's all about the media's hatred and desperation to remove President Donald Trump from office.  Nothing more, nothing less.

The media doesn't care about Jamal Khashoggi.  He's just another means to an end.  Whatever happened to him is just another narrative to make Trump guilty of a crime he had nothing to do with.  Maybe Trump ordered the killing of Khashoggi because he's a journalist?  Trump calls them fake news.  Yeah, that's it.  It's all Trump's fault.  He needs to be impeached.

Never mind that Khashoggi was a member of the Muslim Brotherhood and their beliefs was in conflict with some members of the Saudi royal family.  That's a detail that NONE of the mainstream media is reporting because it doesn’t fit their neat template that Trump is to blame.

When  Ambassador Christopher Stevens,  OUR OWN ambassador was killed in Benghazi, Libya in 2012 during the presidency of Barack Obama, the mainstream media wasn't eager to get to the bottom of that.  They weren't eager to report about all the requests Stevens made to Hillary Clinton for upgraded security because the situation in Libya had become dire.  Four Americans got killed and the mainstream media barely reported it.

Protecting the Obama presidency was just as important then than bringing down the Trump presidency now.
at 10/18/2018 07:53:00 AM