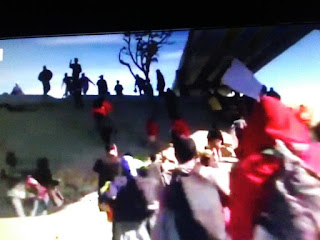 Don't believe the mainstream media lie that these migrants are poor people looking for a better life.
What this really is is a well financed invasion by wealthy Leftist like George Soros looking to force a confrontation.


NY Post reports U.S. Customs and Border Protection closed a section of the southern border with Mexico on Sunday and fired tear gas at a group of migrants that tried to breach a fence separating the two countries.

CNN reported that road and pedestrian bridge access at the San Ysidro port had been closed.

The major artery connects San Diego, Calif., and Tijuana, Mexico.
Video footage from journalists on-site shows hundreds of migrants rushing toward the U.S. border.
The Associated Press reported that U.S. officials fired tear gas at the migrants as they attempted to break through the fence.