Let's be clear Corey Booker is a clown 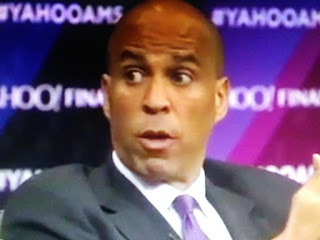 If it wasn't for the mainstream media propping up this imposter the same way it propped up Barack Obama, Corey Booker would be seen for what he is, a joke!

There's nothing about this man that is genuine.  Tucker Carlson said it best when describing Booker as , "…a man so oily he qualifies as an alternative fuel."

Yet Corey thinks he has the goods to run for president.   That assessment screams in want of a psychiatric evaluation.  For when the inseam is passed off as normal, the world really has become  crazy town.
at 11/15/2018 10:37:00 PM