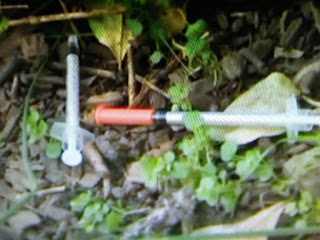 Here's a crystal clear example of why ideas Liberals come up with don't work in the real world.
These people are prone to naval gazing in academic lounges and think they're the smartest people on the planet.  The reality?  They're idiots!

NY Post reports Mayor Bill de Blasio’s plan to have junkies toss their used syringes into special receptacles has failed to clean up drug-infested parks, and the bins are serving more as suggestion boxes — spreading the message that the city is OK with them shooting up there.
Official statistics obtained by The Post from the first six months of de Blasio’s controversial program show that parks in the Bronx are still littered with dangerous hypodermic needles, with nearly 60,000 found on the ground compared with just 7,000 in Hizzoner’s 44 locked containers.
Even worse, the green metal bins are seen as a welcome mat for druggies to take over the parks, said one addict who openly injected himself in St. Mary’s Park in the Bronx Thursday morning with what he said was a speedball of heroin and cocaine.
“They’re giving permission with that box,” said Javier Martinez, 32.