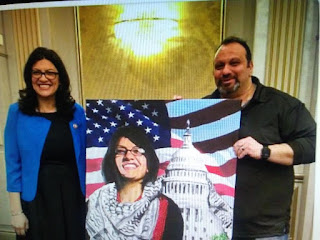 The only reason this piece of dirt is in Congress is because she ran unopposed.

Tlaib, the first Palestinian-American congresswoman, drew headlines the day she was sworn in after she was videotaped an evening event saying it was time to 'impeach the motherf*****,' in a crude comment referencing President Trump.

The line was called out by Republican and Democratic leaders, but Tlaib didn't apologize.