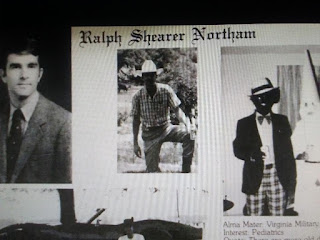 What this photo confirms is the true nature of Democrats that has fooled black people for decades.
The KKK was founded by a Democrats.  Those slaves owners in the South, were Democrats.  Bull Conner was a Democrat.

WRIC reports a photo released on Friday afternoon of Governor Ralph Northam's 1984 yearbook page from Eastern Virginia Medical School shows two men, one in blackface and another in a KKK robe.

The two people in the photograph are holding what appear to be beer cans and the one in blackface is wearing sunglasses and smiling.

After multiple requests for comment, Northam released a statement apologizing for appearing in the photo but did not specify which person in the photo he is:
"Earlier today, a website published a photograph of me from my 1984 medical school yearbook in a costume that is clearly racist and offensive.

Watch this video and learn the history