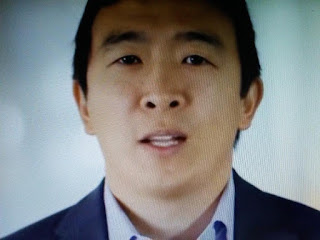 This is how media myths are created.
Take an unknown guy with no history, preferably a minority, and blow him up like he's the next great thing the country can't live without.   It's the Barack Obama model!

San Francisco Chronicle reports the unlikely presidential run of Andrew Yang, who is proposing a $1,000-a-month “freedom dividend” to every adult in America, rolled Friday into San Francisco, where some 3,000 supporters listened to the New York tech entrepreneur warn about how artificial intelligence and robotics are taking jobs.


The 44-year-old son of Taiwanese immigrants who met each other at UC Berkeley has already surpassed expectations — virtually nonexistent when he got into the race — by inspiring enough donations to qualify for the Democratic primary debate in June.