Judge grinding his ax: Trump said Fox's Napolitano asked me to pardon his friend, put him on Supreme Court 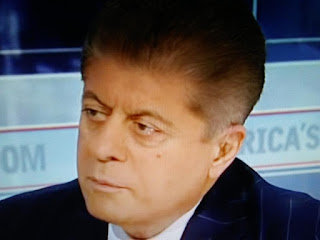 So now we know why JudgeNapolitanao recently said Trump committed obstruction of justice.
Trump turned him down for a supreme court appointment.

The Hill reports President Trump tweeted Saturday that Fox News analyst Andrew Napolitano met with him and urged him to nominate Napolitano to the Supreme Court as well as grant a pardon to one of Napolitano's friends.

Napolitano, a former superior court judge in New Jersey, works as a legal analyst for Fox News. In a pair of tweets Saturday evening following his campaign rally in Green Bay, Wis., the president accused the commentator of becoming "very hostile" after Trump supposedly turned him down for the nation's highest court.

....Ever since Andrew came to my office to ask that I appoint him to the U.S. Supreme Court, and I said NO, he has been very hostile! Also asked for pardon for his friend. A good “pal” of low ratings Shepard Smith.
— Donald J. Trump (@realDonaldTrump) April 28, 2019