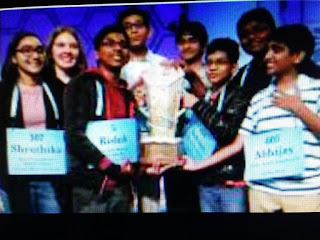 In an era where everybody gets a trophy for participating,  this result is expected and applauded.
But, in reality nobody won this year's Spelling Bee.  Having eight co-winners is ridiculous.  A winner suppose to be that last one standing.  If eight kids remain standing, then there wasn't a winner.


ESPN reports in the most extraordinary ending in the 94-year history of the Scripps National Spelling Bee, a record eight spellers were crowned co-champions Thursday night after each correctly spelled a word in the 20th and final round.