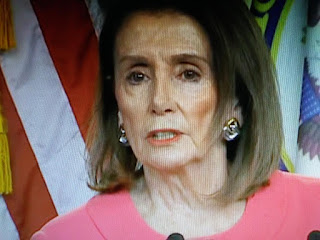 Speaker of the House Nancy Pelosi gave a presser today in which she accused Attorney General William Barr of lying to Congress.
At no time during the presser did she provide any evidence or point out any specifics of her claims. It was a cowardly blanket allegation meant to distract public attention away from DOJ corruption by a cabal of dirty cops such as James Coney, James Clapper, John Brennan, along with Barack Obama and Hillary Clinton.

All these people are currently under investigation by the AG and the IG of the DOJ and their findings are coming out in the weeks to come.  In the meantime the Democrats and the mainstream media are circling the wagons to cover their misdeeds.
at 5/02/2019 07:36:00 PM