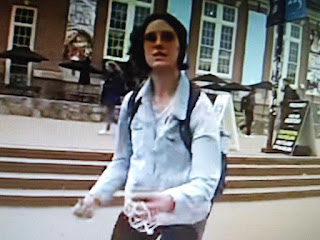 This younger generation of Leftist has been taught by their Leftists elders that it's okay to get violent when "triggered."
That's a bunch a bullshit and it's wrong .  This 19 year old woman belongs in a psych ward along with many in her generation.

Free Beacon reports a liberal college student was arrested after allegedly punching a pro-life advocate at the University of North Carolina at Chapel Hill last month.
Jillian Ward, 19, a pro-choice feminist, assaulted Austin Beigel, who works for the pro-life group Created Equal, after approaching the group's display on April 2, Fox News reports. Ward claimed to be triggered by photographs depicting aborted children put up by the group.
Ward asked the group if they put up the photos, and then ran towards Beigel after he confirmed they did. Beigel was reportedly punched in the face and also received a blow to the stomach.
"F***ing terrible person," Ward yelled. "You're a terrible person. You — this is not okay. This is not okay. This is not okay. Shut the f**k up right now. This is wrong. This is triggering. You're not an innocent human being. You're a terrible person."